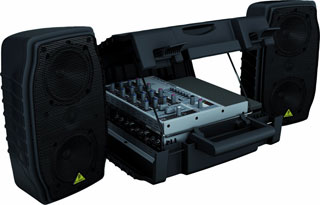 The specification for the Behringer EUROPORT EPA150 Ultra-Compact 150-Watt 5-Channel Portable PA System is quite impressive considering it is seen as a low-end model by so many.

Among the many promises in the product description are that it can offer “enormous power”, “precise frequency correction” and “incredible sonic performance”; all of this sounds rather appealing, perhaps suspiciously so, but have buyers actually reported that any of these claims are realised?

Does this versatility and quality come through in buyers’ experiences and what other advantages has this Behringer EUROPORT PA System offered?

The advertised quality of this product is something that is actually mentioned by buyers in a positive light, with some echoing the idea of “rugged construction” that has been put forward by the manufacturer and others praising the compact, portable size and the surprising number of features and parts for a machine that is at this end of the scale.

Among the highlights with these features are the choice of 100 effects, such as the delay and pitch shifter, and the fact that are the cords and a microphone is already included in the package with an additional case to store them all in, adding a sense of convenience and even greater value for money.

There is also a feedback detection system included but this has been overlooked in reviews. Whether this is because it works unnoticed or that buyers have experienced some of the bigger sound issues mentioned below is unclear.

The other selling point of the Behringer EUROPORT EPA150 PA System is the apparent versatility that it can bring with its different ports and its claims of being “perfect for entertainment, multi-media presentations, press conferences and board meetings” and many buyers have praised the ability to hook up an iPod or computer with relative ease.

There are many five star reviews that cite this ease of use and the quality offered, suggesting that most customers are satisfied, but these reports mostly come from single users with limited needs in public speaking, basic amplification and singer/songwriters. Unfortunately, not all users have such a good experience.

Why is opinion so divided about this Behringer EUROPORT PA System? What negative aspects have been noted?

The biggest problem that users have noted in their reviews is that the sound quality and capabilities of this machine are quite limited, especially if there are many of you wanting to use the machine at once or if you are DJ needing plenty of bass.

Even with 100 effects to choose from and the so-called powerful woofer that is advertised, the bass levels are far to low for many and it takes a lot of work with the equaliser to get close to a decent result. On top of this, the system seems to get a little confused when multiple instruments and devices are plugged in at once, offering little clarity or distinction in the sound.

Other buyers have suggested a few alterations that could be made to the design of this Behringer PA system to make it a little easier to use: these include a harder, detachable case to safely store the accessories, unlike the soft, ‘integrated storage compartment’ that some received.

The ability to attach a strong, sturdy stand for greater convenience – as the idea that it can be used with a standard microphone stand has been contested – and changing the shape of the casing so that it opens better for greater access and is flatter for greater stability.

Summary: do these limitations in the Behringer EUROPORT EPA150’s purpose mean that it is not recommended?

Some reviewers offer the sentiment that it “works well enough for our needs” while many others complain of its limits for certain types of user. The combination of the two is actually a great way to sum up the product. It has some major benefits if you want to use it with one device for a straightforward purpose, even though there are limitations to the design, but it is problematic for those wanting strong bass levels and multiple instruments.

The Behringer EPA150 is good enough with the basics to offer a great value PA system for a small event, particularly with all those settings and the simple ports, but you wont be able to raise the roof at larger venues with a full band.

You can check out more customer reviews about the Behringer EUROPORT EPA150 Ultra-Compact 5-Channel Portable PA System on Amazon here.

This site uses Akismet to reduce spam. Learn how your comment data is processed.